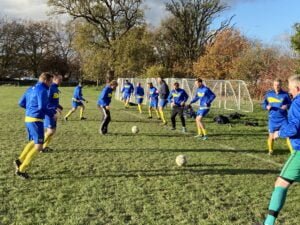 Nice to be back again and on a lovely day at a good facility with a flat pitch.

After 25 minutes you would’ve thought this game was done. Ascot stormed to a 4-0 lead. Rocket played through to Sam who bent his run to stay onside and then lift it over the keepers head. Good finish and 1-0. Another good move started on the left and switched quickly to the right to Dave S who whipped in a quality early ball. Sam rose about 15 years out and put a beautiful header into the top left corner leaving the keeper with no chance. After 14mins Sam worked hard to press high on the left and the ball broke to Stu just outside the angle of the box and he hit a wonder curling shot into the far corner for the third. Tim clipped a lovely free kick into the penalty area and Ben stooped to head home the fourth after 25 minutes.

On 30 minutes Ascot inexplicably took a short corner and a very poor one which left a Claygate player in yards of space to attack. He broke forward and shot wide. Remarkable passage of play that seemed to set a tone for the rest of the game. Ascot were playing really straight now and not really moving the ball about the pitch anymore and to their great credit Claygate began to get back into the game. On 41m, under no pressure, Ascot lost possession of the ball. A run and then a deep cross found a Claygate striker in space and he cut inside the Ascot defender and finished comfortably. 4-1 at half time.

A clinical first 25 minutes and then a hesitant ending to the half.

Ascot started the second half well with good breaks down the left with Micky Parker always available to receive the ball and move it on accurately. Ascot then decided to give Claygate a really good chance to come into the game and they duly took it. Hesitant play, poor ball retention and being outfought by Claygate who just seemed to be more engaged in getting back into the game. By the 65th minute it was 4-4. A deflected shot lifted Claygate on 57 mins. They broke down the right and the Ascot keeper made a good save with a strong right hand. Ascot no longer taking responsibility for the basics. A chest trap back to the keeper didn’t seem to be any sort of problem but a fumble resulted in the ball crossing the line and it was 4-3. A cross whipped in from the right wing was deflected towards the goal and the ball dribbled over the line again and it was 4-4. Pantomime stuff but well done Claygate.

You had to say that Claygate were favourites to win at this point. Ascot did create a few chances with Rocket and Turbo both testing the Claygate keeper who stood up well to block and save. A Claygate striker was caught a few yards offside and oddly decided to get in the ref’s face about it. Sinbinned and Ascot took the chance that this gave them. The last period of the game swung on this,  Ascot pressed forward and with about 10 minutes left, Ben Spence smashed the winner into the roof of the net. Claygate nearly pulled it back again when a corner hit the near post but went behind.

A great start by Ascot and then a great response from Claygate. Things to learn from this.