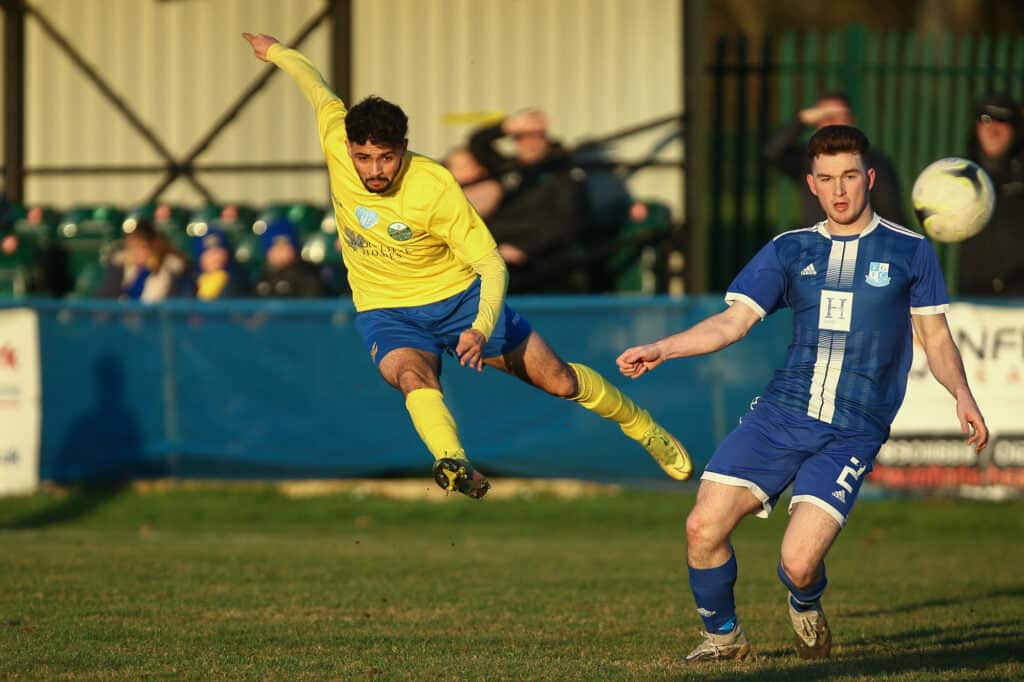 Harry Laflin scored a brace as Ascot United cruised to a comfortable 4-0 win at Frimley Green on Saturday. The Yellamen’s top scorer – making his 100th appearance for the club – took his tally to 11 goals for the season as Ian Davies and the hugely impressive Duarte Surpanu both weighed in with a goal apiece.

After the lights went out at half time at Egham last weekend, it was good to finally get 90 minutes of football in, and it was all-Ascot early-on.

Indeed, the game was only five minutes old when Surpanu (pictured, shooting-stars.co.uk) smashed a side-footed volley home after Laflin’s direct free kick had skirted up off the defensive wall, a chance owing to the endeavours of Taylor Morgan who had earlier won the free kick in what was an equally fine display from him.

The match was all-but-over shortly beyond the half-hour mark after Laflin’s successful penalty – awarded when ‘keeper Chris Harris felled Davies – and Davies himself had slammed home, although on another day it could easily have been six-nil or four-two.

Visiting ‘keeper Sam Gray would later make fine saves to deny Mark Thomas one-on-one and Nathan Connolly’s angled drive from the rebound just before the hour mark, but even when the home side did have the ball in the net – after just 11 minutes of the game – an offside flag put paid to Connolly’s celebrations.

Surpanu was, at times, unplayable. His speed out of the blocks had paved the way for Laflin for tee up Ascot’s third, and ultimately the visitors’ man-of-the match award was frankly unquestionable.

The scoring was completed in the 54th minute when Davies skipped clear of his marker and cut the ball back for Laflin, who did what he does best with a side-footed finish across Harris and into the bottom left.

Laflin would later fire over when well-placed and substitute Aiden Higgs’s shot was deflected wide in added time, but that came only after Gray had been at full stretch at the other end to preserve a clean sheet in tipping away Aiden Phillips’ long range effort.

The only major blot on the copybook was injury to Sam Evans who left on a stretcher shortly before the interval, although his fellow defenders maintained his age-defying defensive maturity to secure a clean sheet.

The Yellamen will now prepare for their two home fixtures before Christmas, starting with the visit of Camberley Town next weekend.