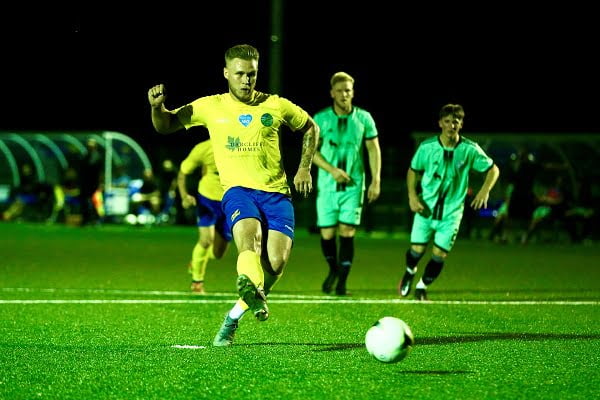 Ascot United marked manager Jamie Tompkins’ 100th game in charge with a devastating display as they hit Frimley Green for six under the lights on Tuesday evening. The visitors started brightly, but ultimately had no answer for the rampant Yellamen, whose 6-0 win was littered with high quality goals.

Frimley had arrived off the back of a good FA Cup win last Saturday but had lost both of their league matches prior to that, whereas free-scoring Ascot were looking to build on the stunning comeback victory over Colliers Wood on the same day.

In a fast-paced opening, the visitors were quickly on the front foot with striker Reece Connolly’s deflected volley fizzing over in the third minutes before Jordan Carter’s swerving effort forced Sam Gray into an uneasy save two minutes later.

At the other end, Louis Bouwers struck the top of the crossbar with a header from Jonny Denton’s corner as the early chances rained in; seven minutes played.

Max Alvarez-Lopera might have done better with a free header for Frimley in the 12th minute, but after that Ascot gained a foothold and would create most of the chances.

James Richardson epitomised his side’s workrate when he chased down defender Tom Cooper – and after robbing him he was pulled back in the penalty area with the referee well-placed to award a spot kick – which Aaron Berry rolled into the bottom right midway through the half.

Berry could – and probably should – have doubled the lead in the 27th minute after robbing a defender, only to see his shot lack enough pace, which allowed visiting ‘keeper Stuart Norman to get down low and make a decent save.

Both sides huffed and puffed before the break, but it remained one-nil as the two sides changed ends.

And what a change of ends it was. Just five minutes after the restart, the excellent Richardson robbed defender Owen Cranmer-Flynn, picked out substitute Ian Davies, and although Norman did well to get fingertips to his cross-shot, Berry gambled on his run to the far post to tuck home the loose ball.

Cranmer-Flynn was the pick of the visitors’ side, and he would see a swirling effort narrowly miss Gray’s left-hand post soon after, although it was otherwise one-way traffic.

Berry’s thunderous effort was saved by Norman after Davies had spun his marker and played him in – 61 minutes on the clock – before Jonny Denton’s free kick over the wall left Norman rooted but found the wrong side of a post.

But The Yellamen’s third would soon come albeit from defender Jamie Connor who sliced Riccardo Andrady’s wicked cross into his own net under pressure from Berry, before Richardson curled a quite brilliant long range effort over Norman and in off the underside of the bar in the 77th minute to make it four.

The home faithful were already purring in dreamland, but Davies would add the icing with a delightful lob from Elliot Carey’s through ball five minutes from time, and if that wasn’t enough he then threw in the candles, cherries and bunting with a beautiful, curling, left-footed effort two minutes into added time to cap a memorable night for Tompkins.