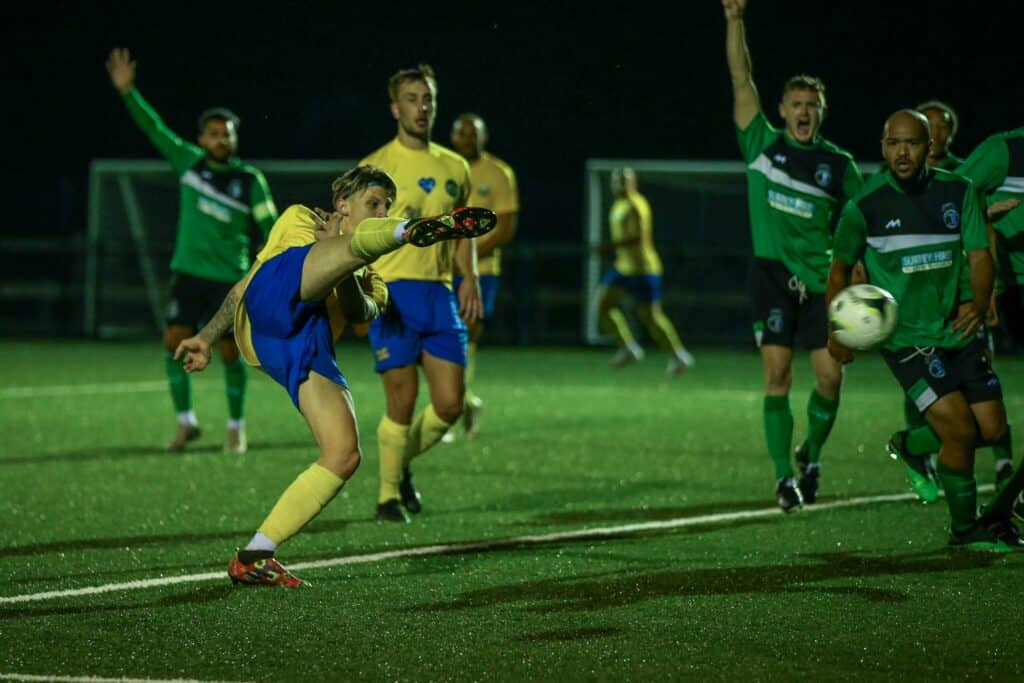 CB Hounslow fought hard but were eventually beaten 3-1 by Ascot United on Tuesday evening as the home side extended their unbeaten run to five matches. Leading 2-0, The Yellamen inflicted a self-inflicted wound when Harrison Cliff was dismissed before the break, but eventually sealed victory after the visitors had halved the deficit.

Both sides had been hard to beat in recent matches with Ascot’s unbeaten four-match streak comparing to Hounslow’s solitary defeat in their last seven, making for a tight game on paper.

There was still no return for the combative Elliot Carey who still waits for his 50th appearance, but fit-again Louis Bouwers slotted back into defence after missing the past three games – and his performance alongside the superb Dan Bailey would underpin the victory.

Ascot were quickly about of the blocks and might have scored in the sixth minute only for Sam Bersey to react well and claw Harry Laflin’s effort away after Aiden Higgs had earlier been well-tackled when attempting to convert James Richardson’s through ball.

However, it was one-nil a minute later when Higgs (pictured, credit: Neil Graham photography) reacted quickest to hook home after Richardson had headed the ball back into the danger area.

CB Hounslow rarely threatened and when they did were either wasteful in the final third or thwarted by an offside flag, but it was another twenty minutes before the home side threatened again when Taylor Morgan burst down the right, cut the ball back for Richardson – who saw his shot blocked – before Laflin curled the loose ball wide of the top right.

But the visitors were rightly incensed when defender Harry Driver’s perfectly timed tackle on Richardson cost his side a penalty – photos would later confirm the erroneous decision – although Laflin showed no mercy in tucking home the spot kick on the half-hour mark.

Bersey raced quickly from his line to smother at the feet of Cliff in the 43rd minute, but Cliff’s evening soon ended when he was dismissed for a late challenge on Thomas Ranek, leaving Ascot a man down for the second half.

With their man advantage, The Dragons sniffed blood and after a decent opening spell they got their reward when Jordan Vidal’s vicious, swerving effort from distance sailed over Gray for a fine goal ten minutes after the restart.

Lewis Woods might then have done better when well-placed as Hounslow knocked in the now-creaking Ascot door, but the home side would ultimately manage the game well and ultimately emerged unscathed.

Indeed, Laflin almost made it 3-1 with a shot from a tight angle after Josh Masters had done well to win possession and tee him up – Bersey alert to the danger again – but he was powerless soon after when Ascot delivered a hammer blow.

This time, it was substitute James Haworth’s mazy run – taking three defenders with him – that created the chance, but with work still to do his cross was dummied by Higgs for Laflin to rifle past Bersey.

With fifteen minutes still to play, the visitors would find time to threaten again, although when they did it was Gray who got down well to tip Marcus Williams’ shot round a post after Bouwers made a hash of his attempted clearance.

As Hounslow ran out of ideas they also ran out of a full quota of players when substitute Luke Berry saw red for pulling Higgs back in added time, but the result was already settled.

Ascot will need to raise their game and more when Knaphill visit on Saturday, but they will take great pride from their second-half resilience on Tuesday.

Following the recent government announcement and subsequent statement from the FA, we will be closing the club for all football activities after the end of training

DAVIES LOPS-OFF LOCKS AND BAGS THREE AHEAD OF LOCKDOWN

Ascot United will continue their league cup campaign on Tuesday evening with the visit of Chessington and Hook United, in what will be the final

Ascot United kick off their Buildbase FA Vase campaign this Saturday with a return to Southern Combination outfit Newhaven (3pm). The Yellamen will be returning