Introducing our new Director of Football for Women and Girl’s

Harry Grant is proudly sponsored by 58 Barbershop for the 2022/23 season.

Ascot United romped to a 3-0 win at North Greenford United on Saturday in a fine team display. Debutant Charlie Morgan weighed in with a

HONOURS EVEN AS ASCOT PEGGED BACK BY TADLEY   Yellamen draw 2-2 after leading 2-0   Ascot United went two-nil up, hit the woodwork and

Ascot united survived an early set back and a late scare to win 3-2 on the road at St Panteleimon on Saturday, extending their winning

Ascot goalkeeper Sam Gray celebrated his 100th appearance for Ascot United on Saturday in a remarkable 4-2 comeback victory at Edgware Town. Trailing 2-0 after

Tickets MUST be purchased online in advance from https://www.eventbrite.co.uk/e/ascot-united-v-camberley-town-fc-tickets-132712983105

WATT A SHAME AS LIGHTS GO OUT! Yellamen thwarted by Egham floodlight failure  You wait 4.5 weeks for football and get 45 minutes of action

Ascot United ground out a narrow one-nil win against Southall on Saturday afternoon to move top of the Combined Counties League Premier Division. In the day’s only Premier Division fixture as FA Vase qualifying began elsewhere, a solitary own-goal was enough as both sides were reduced to ten men.

Ascot United marked manager Jamie Tompkins’ 100th game in charge with a devastating display as they hit Frimley Green for six under the lights on Tuesday evening. The visitors started brightly, but ultimately had no answer for the rampant Yellamen, whose 6-0 win was littered with high quality goals. 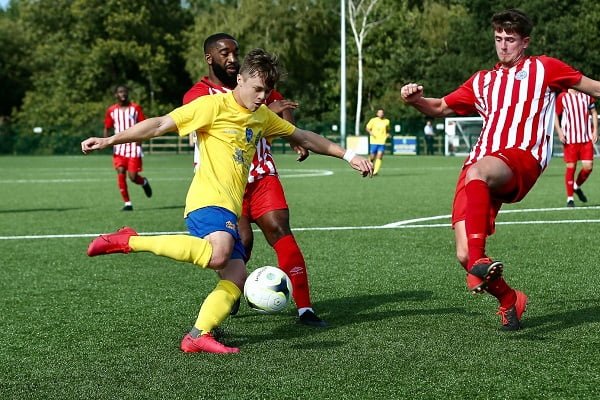 Ten-man Ascot United staged a simply remarkable second half comeback to beat Colliers Wood United 5-2 on Saturday. Trailing to an early second-half goal after Calum Ferguson had been dismissed after just 14 minutes, half-time substitute Aiden Higgs scored a hat-trick to catalyse their recovery after a dismal first half.

Ascot United huffed and puffed but failed to blow Camberley Town’s house down as they lost 1-0 to a solitary second half penalty in Tuesday night’s local derby. A disjointed performance yielded little on a frustrating evening for the travelling faithful, who watched on as their side threw the proverbial kitchen sink at Camberley at the closing stages, albeit to no avail.

Emphatic start to league campaign as Molesey put to sword

Ian Davies and Harry Laflin both scored hat-tricks as Ascot United beat Molesey 7-1 in an emphatic start to their Combined Counties League programme on Saturday. The Yellamen were made to work hard early on, but eventually ran away with the game against their hosts, who conceded seven goals for the 2nd consecutive game.

Experienced centre back who skippered Flackwell Heath in 19/20. Previously played at a higher level with Marlow and has a level 2 coaching qualification.

A fearless right back previously with Binfield and Bracknell before joining us in 17/18. Technically strong and a consistently high performer. Supporters player of the year in 18/19 and part of a select few who have made 100 appearances.

Chad joined the team in the 2021/22 season and now heads up our match day pitch-side support.

Highly respected throughout the club, Jamie guided the team to league cup glory in 18/19 before taking the team to top of the league before

A physical and dominant centre half and a leader on the pitch. Signed from Faringdon Town FC in 16/17 and now well-established as club captain