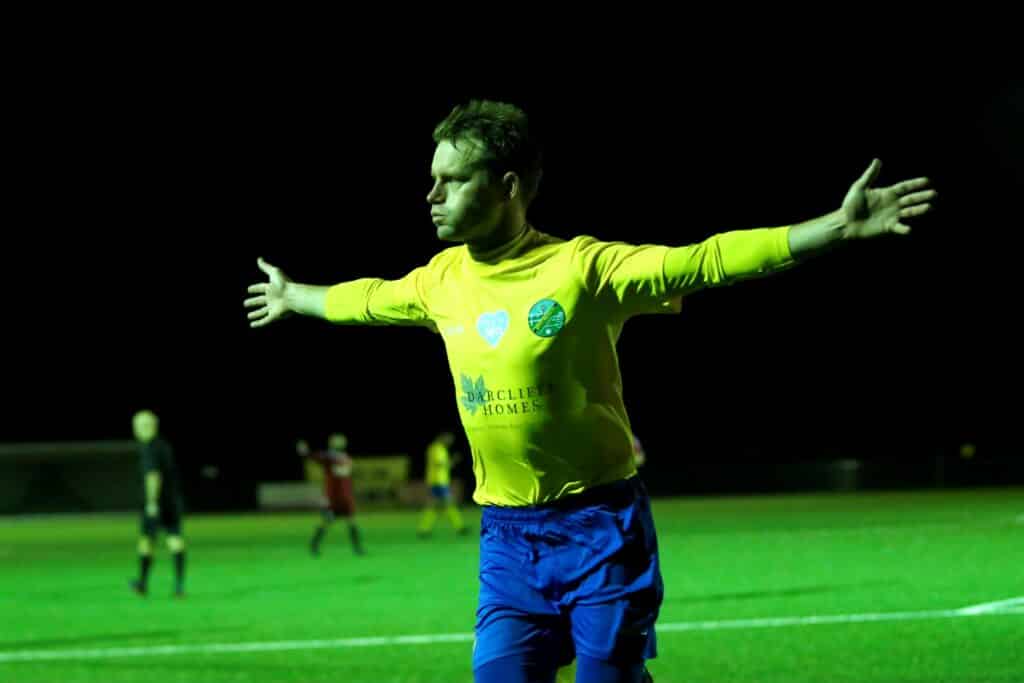 DAVIES LOPS-OFF LOCKS AND BAGS THREE AHEAD OF LOCKDOWN

Samson grew his hair in biblical times to preserve his strength, but Ascot United’s Ian Davies did the opposite to devastating effect as the fresh-faced-looking striker bagged a hat-trick in his side’s 4-0 league cup win on Tuesday evening. Davies – who ditched his beard and locks ahead of the game – was back to his predatory best as Ascot United booked a third round berth en-route to despatching Division-One outfit Chessington and Hook United ahead of the grassroots lockdown.

With a number of high-flying Premier Division sides falling victim to lower-ranked opposition in the previous week’s ties, the draw had opened up for those still vying for a place in the last-sixteen, although the odds still favoured Ascot given their Premier Division status and league cup pedigree.

This was also a match-up between two sides with unenviable disciplinary records having already racked up a card count even Paul Daniels would have been proud of; the question being whether they would now both chill out and enjoy the final ninety minutes of the first spell of a likely-to-be further disrupted season.

Chill out was certainly easy for the fans hungry for their final football fix as pitchside temperatures plummeted, and most of them were warming their hands early on in appreciation of Davies’s opener – a clinical finish across ‘keeper Tyler after superb work form Aiden Higgs and Riccardo Andrady on the right wing.

The visitors, however, had their moments. Alex Nunes and Cameron Peters both saw hopeful shots sail off-target, and Peters would outjump the defence to plant a weak header at Sam Gray later in the half, but the Ascot defence were largely in control.

And, the home side might have doubled their lead before the break only for Tyler to produce a brave block at the feet of Higgs after James Richardson’s wicked cross had invited the chance; Andrady also seeing his follow-up turned away.

Chris Ellis would replace George Lock at half time, and then later exit for debutant Duarte Surpanu after picking up a groin injury, and Surpanu would ultimately score a fine late fourth to seal the win.

But before all that James Haworth’s fierce low shot was superbly tipped away by Tyler who was undeserving of a four-goal defeat, especially as when he produced another low save to deny Higgs later on he was helpless to prevent Davies from slotting home to make it 3-0. Counting further backwards, Davies had already nipped onto Higgs’ clever flick to roll home to make it two-nil just after the hour-mark, but had Peters not slotted agonisingly wide at the other end between Ascot’s second and third goals the outcome might have been different – but Chessington let Ascot off the hook.

Darren Bryan could have bagged the visitors a deserved goal with a well-struck shot from distance easily saved by Gray, but Surpanu had the last laugh as his quick turn of feet in injury time earned his side a fourth just fifteen minutes after coming on. And, a certain magician’s spirit will rest in peace after just one card was brandished in a competitive but disciplined display from both sides; Bouwers the recipient.

Who knows what the next weeks and months will bring, but the facts are that Yellamen signed off with a win and a clean sheet, before the flags were folded for what could be the final time this year.