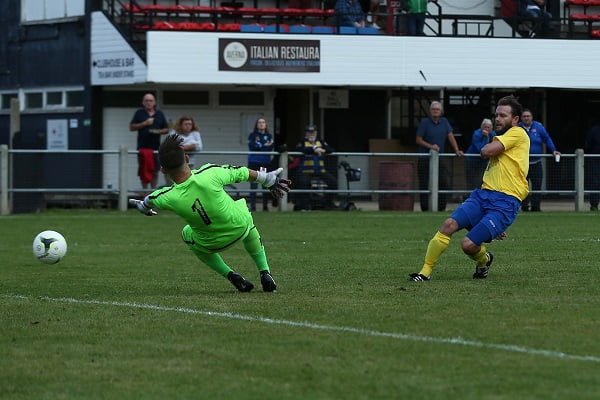 Emphatic start to league campaign as Molesey put to swordIan Davies and Harry Laflin both scored hat-tricks as Ascot United beat Molesey 7-1 in an emphatic start to their Combined Counties League programme on Saturday. The Yellamen were made to work hard early on, but eventually ran away with the game against their hosts, who conceded seven goals for the 2nd consecutive game.

Incredibly, Molesey almost scored inside three minutes when Liam Moore wriggled clear and scooped a low shot across Sam Gray, who got fingertips to the effort in tipping it onto the inside of the right-hand post, before being cleared by James Haworth.

At the other end, Davies raced through before being pulled down inside the area, although an offside flag extinguished the initial penalty award given by the referee.

Molesey’s best move of the half saw Cory Hall exchange a neat one-two with Moore before picking out Mamadou Doukoure, whose poor shot was easily saved.

But Ascot took control and shortly after Davies lobbed wide from distance, he gave his side a 26th minute lead. The goal itself owed much to James Haworth, who had robbed Hall from Michael Bawn’s goal-kick, skipped down the left and planted a teasing cross for Aaron Berry. And, whilst Berry was unable to convert first-time, he picked out George Lock on the overlap, who drilled a wicked cross from the right for Davies to hammer home from close range.

Lock would have been man-of-the match had it not been for Davies and Laflin, and he was on hand with a covering tackle after Doukoure threaded Moore in when the hosts broke clear from an Ascot corner.

And, Ascot punished their hosts three minutes before the break with a goal that owed much to the persistence and vision of Laflin. Taking possession in the middle, his strength took him through two challenges before lifting a sublime pass over the defence for Davies, who had time and space to pick his spot under Bawn.

The second half was a one-sided affair where the visitors looked capable of scoring at will. Laflin would follow up when Davies’ shot was saved to make it 3-0 in the 54th minute, Lamin Sankoh blazed over a chance to make it four moments later, but Laflin soon scored from the spot after superb work from substitute Riccardo Andrady in the 63rd minute.

Home substitute Darilish Heravi earned and scored a consolation penalty for Molesey, but the onslaught continued at the other end as Ben Hodges raced onto Laflin’s pass to roll home a fifth, Callum Ferguson picked out Lock for another assist as he unselfishly squared to Davies for number six, before Laflin wrapped up his trio with a wonderfully disguised curling effort from a tight angle across Bawn and into the bottom right hand corner.

Incredibly, Laflin had earlier had a header chalked off for offside, but it was already a distant memory as the Yellamen celebrated a fine start to their campaign, even if tougher tests will surely come.